Back To Shop > Vintage & Antique Gold 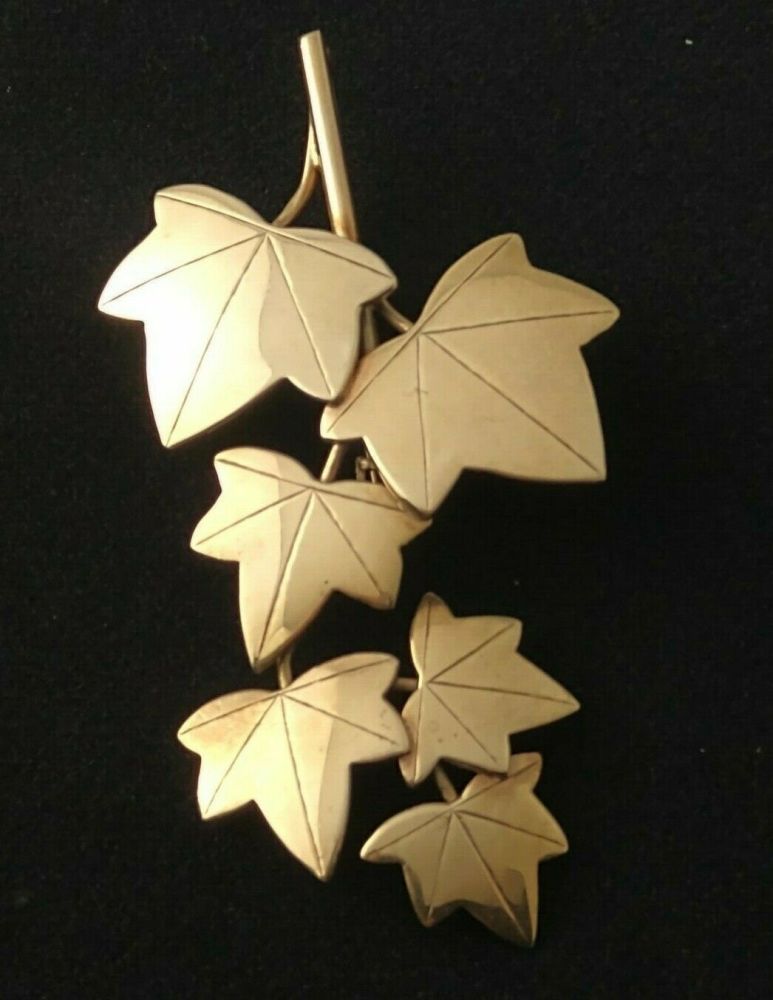 0 in your basket
View Basket Checkout
A mid century 9ct gold brooch featuring six naturalistic ivy leaves, the smaller sprig hanging by a loop  from the larger affording movement.
The brooch is fully hallmarked for Birmingham 1961, bears sponsor's mark for George Tarrat and designed by Geoffrey Guy Bellamy,* Freeman of the Worshipful Company of Goldsmiths. Bellamy often stamped his pieces with a facsimile signature or left them blank as in this case.
Condition - Good.
Length - 7.5cms.
Weight - 11.57g.
*Geoffrey Bellamy, Freeman of the Worshipful Company Of Goldsmiths, was born in Birmingham in 1922.   After the war, he studied at the Birmingham College of Art from 1946-50, then at the Royal College of Art under Professor Robert Goodden, graduating in 1953 with a first-class degree – the first RCA student studying silver ever to do so.  His period of study overlapped with those of Gerald Benney, Eric Clements, David Mellor and Robert Welch.  Following his graduation, he worked on his own from a small workshop in Chelsea while designing pieces for George Tarratt.  Like his peers, he was greatly influenced by Scandinavian design and,the emerging contemporary post-war British design that is synonymous with Bellamy’s work.
George Tarratt, a manufacturing and retail jeweller and silversmith in Leicester, established the company under his name in 1913, gaining a reputation for supplying quality silverware.  George’s son, Ivan, joined the company in 1936 after training with Wilson & Gill in London. He expanded the jewellery and watch lines as well as maintaining the company’s reputation for supplying top quality silverware.  At some point after Bellamy established his Chelsea workshop, Ivan Tarratt approached him and asked him to design jewellery in the style of Jensen.    Primarily focused on jewellery, the business arrangement with Tarratt included his financial support of Bellamy’s workshop and possibly also the initiation of wider distribution of Bellamy’s small silver range.  Being the ‘County Silversmiths’, Tarratt’s also gave Bellamy the opportunity to design silver, as there was a strong civic demand in the late 1950s.

Recommend this to a friend  +